Part 1, first days : on nostalgia, decay and the absence of reason 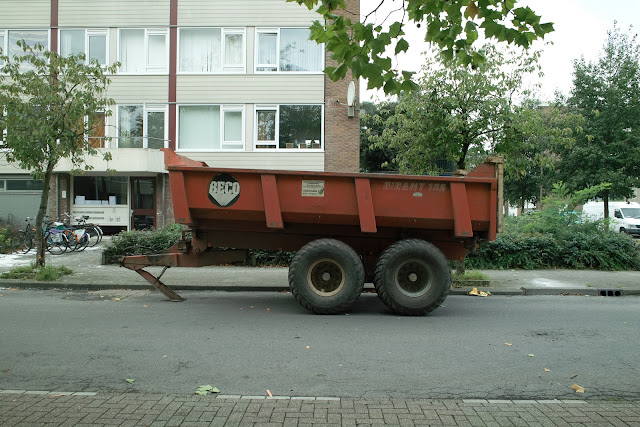 parked cargo trailer for removal of what is left behind from emigrants leaving the area, Kanaleneiland 2011

first days
on nostalgia, decay and the absence of reason

The first time I 'encountered' Kanaleneiland was on Wikipedia, and this is what 'they' said:

Kanaleneiland is a district within the Southwest section of the Dutch city of Utrecht. It was created in the massive expansion of the city in the 1960s. Today it is listed as one of 40 "problem neighborhoods" that require extra attention by the Dutch Ministry of Housing.[1]
Kanaleneiland's residents have low levels of employment, health, and education.[2] Approximately 76% of the population are not ethnically Dutch, most of them of being of Turkish and Moroccan origin, young, and distrustful of the ethnically Dutch police. Crime and racism are endemic.[3] This unique political climate is one that shaped the views of one of its ex-residents, national politician Geert Wilders.[4]

Having grown up in the suburbs of Lisbon, roaming through the location of Kanaleneiland brings some memories.
'We' were both the southwest section of a major city that housed all that was supposed to exist beyond (and clearly off) the center.

The area seems neglected, the buildings having not been taken care of.

Everyday that passes, one can see a moving van, a container being filled up with housing leftovers, and what is named of 'foreign emigrants', leaving.

Everyday that passes, one can see some 'local young students' taking up an empty space, and rebuilding it, putting new curtains, opening shop.

There are some mural paintings, and some side buildings painted in rainbow multicolors, which i discover later, was made, cheerfully by Phillips workers, on their weekend off work.

It all feels a bit like 'adding insult to injury', coming from some post-colonial white guilt feeling (I can quickly recognize these syndromes, due to my imperial heritage as a Portuguese ex-citizen). And I, feel nothing but welcome here.

If in the suburbs of Lisbon, one had to grow through a Portugal post-colonial present, dealing with generations of African kids that were born in Portugal, but were not taken by society, in the suburbs of Utrecht one can find 'le eau de colonial' present of the Netherlands, in the relation between the local arab-dutch (did I write dutch?) working class, nation and real estate, or just A large amount of guest workers from the 50's and 60's, from Morocco to Turkey, that came to rebuild a Netherlands post-Second World War landscape. And all this is very new to me. Same color as in Portugal, very different forms of tackling the 'issue'.

With any economical crisis, the class of emigrant workers, that 'second hand' citizen that was once welcome (since they would do willingly the jobs that national residents wouldn't, and do them for 2 thirds of the usual pay), this class that travelled for the exceed of work, is now the first one to face unemployment.

In that 80's suburbian reality, many white (the returnees from African colonies) and black (the african refugees) portuguese, acted out aggressively, out of a simple social phenomena, that they didn't have a past , nor they didn't have a future to belong to (the working class rarely has the cash to bank a family trip back 'home' to revive its roots and Europe has always been keen on asserting where does one belong, and where one does not belong too - even beyond 1st, 2nd or 3rd generation, oneself is still seen as a foreigner among those who are originally for the specific location).

Usually they grow out of it, and find a place in society, after some good years of struggling, in which a small minority gets in jail, junked, or dead. At least that is what happened in Lisbon, back in the early 90's. The war was over, or so it seemed. My father fought the colonial war in the late 60's in West Africa, during the last years of the fascism regime in Portugal circa '71, and many times told me how easy the new generations had it. I always wanted to tell him that the war didnt end, that it followed him, that it crept into the suburbs of Lisbon, an invisibly growing tension, but I never dared.

The question ends in territory and ownership. How has to leave, who can come. What belongs to whom, and why.


The urban dynamics present in this location remind me a conversation with KT, back in Detroit, when she was describing a talk with her mum 'so i told her, your son is fighting the war in Iraq and Afghanistan, a state war, and your daughter is fighting a war down here in Detroit... an urban war.'

suburbia |səˈbərbēə|
noun
the suburbs or their inhabitants viewed collectively.

suburb |ˈsəbərb|
noun
an outlying district of a city, esp. a residential one.
ORIGIN Middle English : from Old French suburbe or Latin suburbium, from sub- ‘near to’ + urbs, urb- ‘city.’


... , their inhabitants viewed collectively. One cannot see this location as a collective. Every small faction stands separated, compartimentalized, with the exception of the local community dinner, Resto van Hart, where people sit under one roof for a dinner meal, though still at separate tables.

The most immediate visible groups are the young children from the emigrant working classes, and the young dutch art students and practitioners. What about the other groups? The ones less visible? Is it possible to relate deeper? In one month? In 20 days?

While walking around, I face the constant view of old Mercedes-Benz, which gives a certain feeling of nostalgia. One of the first artists Expodium had here, made an interesting blog post about the mapping of the vintage Mercedes.

The repetition of the object, in various models and colors, while one travels across the location, creates as if a visual mantra that evokes a nostalgia.

nostalgia |näˈstaljə; nə-|
noun
a sentimental longing or wistful affection for the past, typically for a period or place with happy personal associations : I was overcome with acute nostalgia for my days in college.
• the evocation of these feelings or tendencies, esp. in commercialized form : an evening of TV nostalgia.
DERIVATIVES
nostalgist |-jist| noun
ORIGIN late 18th cent. (in the sense [acute homesickness] ): modern Latin (translating German Heimweh ‘homesickness’ ), from Greek nostos ‘return home’ + algos ‘pain.’

→ for further research: from nostalgia as term to emigrant's nostalgia, dream, home, power (de 'pou vouir', from french - to can , to be able to) 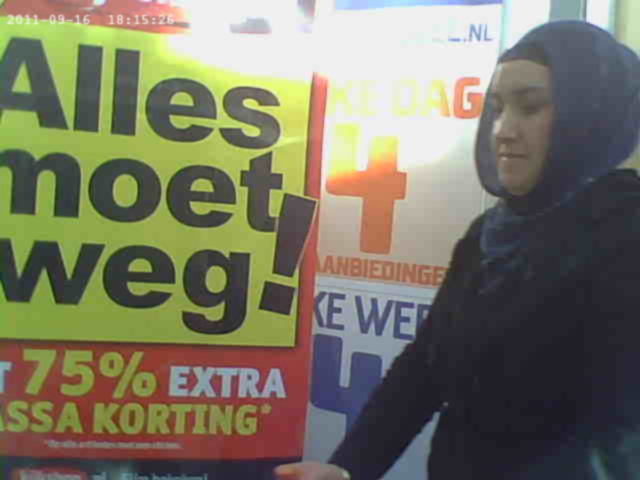 'all must go/alles moet weg'  still from camera footage of shopping mall, Kanaleneiland 2011

Posted by LOCATIE:KANALENEILAND at 9:19 PM