Social / Anti Social
There is still a smell of cutted wood, on the porch. Although the buildup ended last Sunday, there are factors that I could not control, or in a better way, my plans became quite difficult to follow. What’s up with the stones in this neibourghood? Since I’ve step foot here for the first time, I’ve been watching what seems to be a huge resistance to the normal living of a daily routine, not only as an artist but as a regular somebody who is trying to live and work here at the same time. Here lies the known feeling of shaping, and formatting.
I see them and they see me, even when I’m inside I hear them (loud), as they hear me (louder). Every day, they ask me if it’s about ice cream, to which I reply, No, it’s about red wine. They must think I’m joking, of course, and that it would be absurd to have a Haram drink over there, especially in their pretty neighborhood. I suppose I could also ask somebody to explain the hole reason of this to them, but would it make a difference? This is clearly not one of those typical artist residencies where you feel apart almost disengaged from local contact, pursuing only what you had in mind. 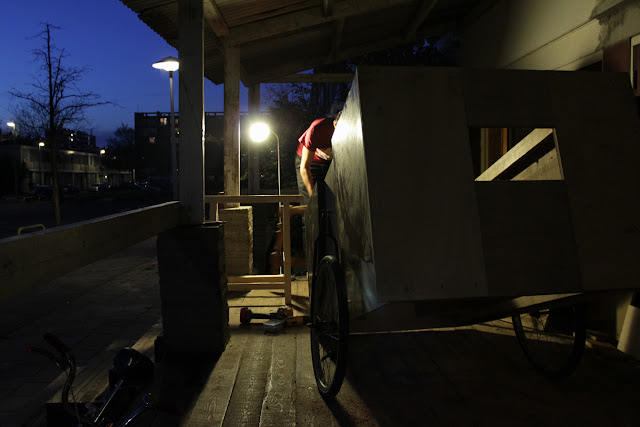 There is a light blue door that lets you access to the inner parts of the vehicle, designed to keep the bottles and the glasses, and they enjoy opening this door and sneaking through it while playing. Once in the inside, it becomes a refuge, because in there exists a fundamental feeling as if you are not seen from the outside and so you can talk, and even move the Tasca from the inside, allowing  them to cheer up. So, when I’m not looking they hide there in pairs, doing what they do best: dreaming.
We seem to share some common ground, since kanaleneiland is going “bye bye” also, for the government has plans to demolish it. In the beginning, the idea was to talk with the locals about the disappearance of this places, it’s aesthethic, and its grand social power. Yet, due to a sort of expansion mode, the Tasca became also part of the porch, and so part of the playground. This merging was non-intended but very fruitful in the sense that this social sculpture had integrated the lives of these younglings. 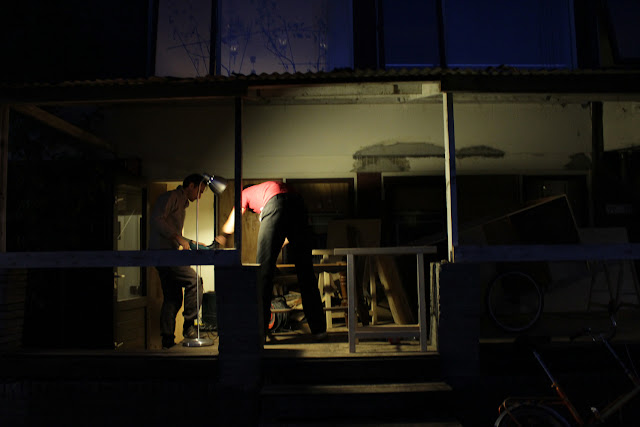 They want to tear it apart.  Actually they almost managed too, but I stopped them before they could burn it down. I can’t blame them though, for it is, after all, an amplified toy, made with the purpose of potentiating facts, stories, happenings if you will. And they know this very well. They may not verbalize it, but they do know it and they play it: When the noise becomes too intense, the man comes outside to safeguard the area, and make sure that the vehicule is still in the right place. They love my reaction. Throwing objects and shouting at me, they seem to live for that.
The air holds a full fascination on how, and for what it was built, also what tools were used. Although they saw the building of it, they are also desperate to grab the hammer and start banging with it on some nails. Not to be annoying but to show that they are present, and that they want to interact with me. Certainly it became a game of big interest for them, since I always seem to reply in a different manner of what they are used to. The day before, I had drew an iphone and black berry on two pieces of wood and they were smiling. 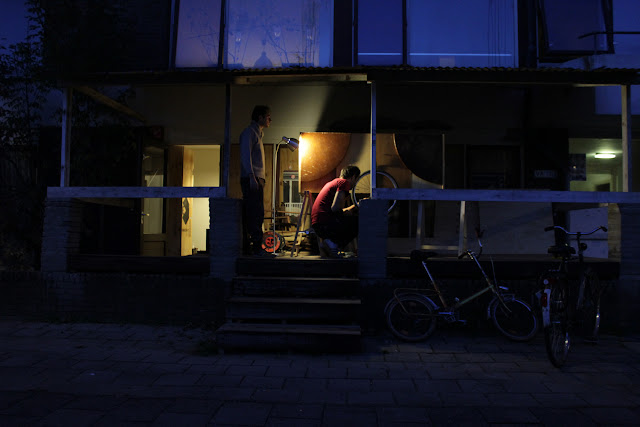 They hate camera’s, and photos. I wonder why. 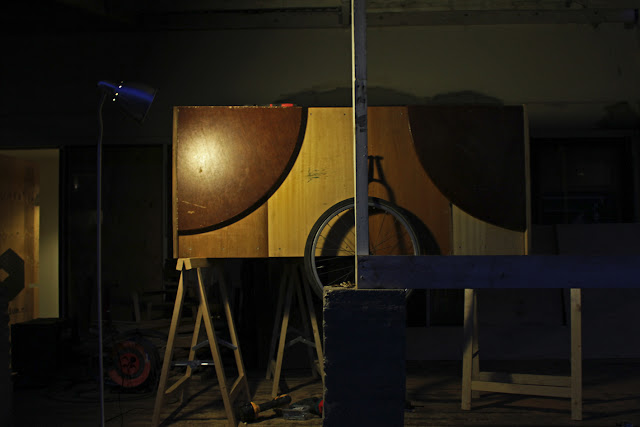 Me and the fellows from OTIA TVTA are planning to sing Fado’s on Friday. This is an enchanted romantic way of showing the culture of our country and creating the right ambience to find a bride to get married on the next day. So we rehearse and they listened outside. One of them enters and climbs the staircase, to which Eduardo Petersen shouted, while in the middle of his song, “Povo Adormecido“ (Sleeping People), CAN I HELP YOU!?
The little one runs away laughing, waiting downstairs, ready to climb again. 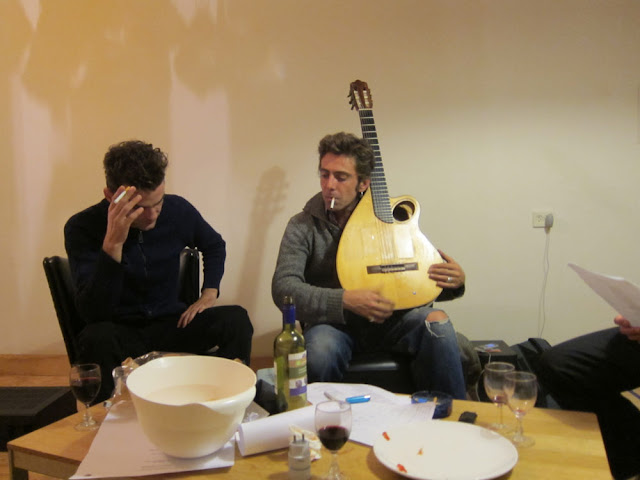 The next day we took the Tasca for a walk along the streets, where we sang in a low key, stopping some times for a drink, and to invite other persons who might want to join us. The sun sets on our pass as we stroll along the Kanal and I remember Baudelaire’s term “flâneur”, when he addresses us as walking, sensing, vibrating people, in search for the hidden parts of the city. Besides this, Two men stopped to know more and I served them while the explanation was dealt. The red wine was Portuguese, Quinta de Pancas, 2008, and it had a taste to something like deep mint, and somewhat fruity as well. Strong but not too strong, ideal for two, max. 3 glasses, if you want to keep your spirit in a proper level. 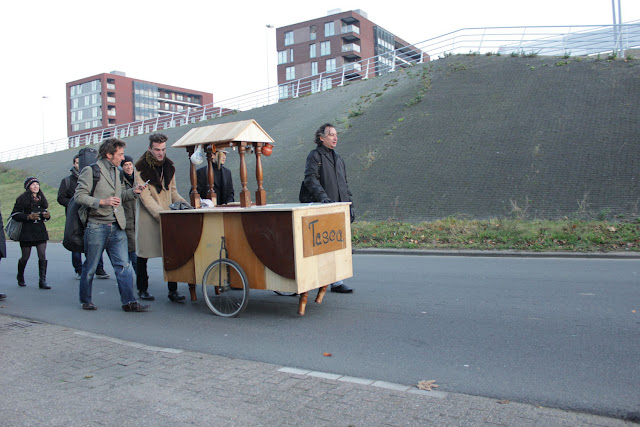 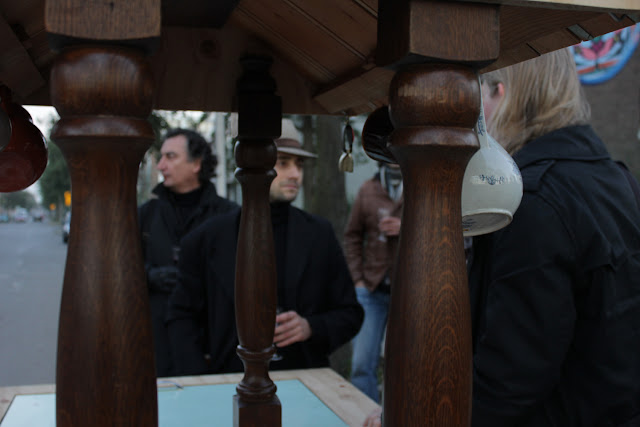 Before we entered Resto van Hart, for our singing night, I drink another glass, to feel in the mood. This Restaurant is runned by Jolanda Panis with whom I had the great opportunity of collaborating with, for her great enthusiasm and dedication to the Portuguese kitchen and ambiance. Resto van Hart's idea strives to serve the people of the neighbourhood, respecting their religious beliefs (they usually only serve halal food) at a cheap price, for an integration of the people of the neighbourhood. Everyone is welcomed to eat and meet new people, while sitting randomly at the tables.
Outside, Paulo Lisboa and Francisco Cordovil look ready for action, while inside Agostinho Gonçalves and Eduardo Petersen set their voice on a comfortable way.
Jolanda Panis has cooked Portuguese, Caldo Verde as starter, Caldeirada, for main dish, and tarte de natas as dessert. In between courses we sang our 3 set's of Fados. 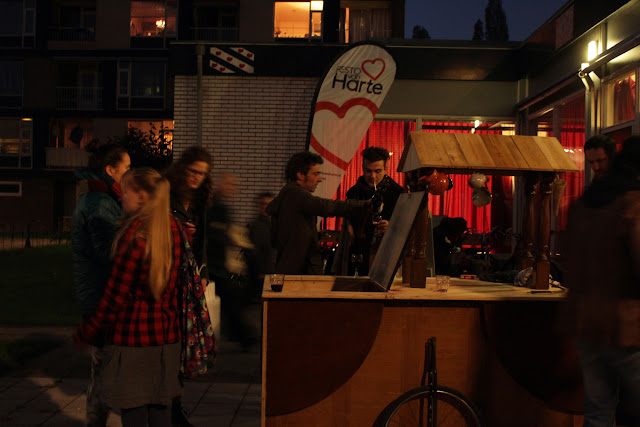 Posted by LOCATIE:KANALENEILAND at 5:30 AM