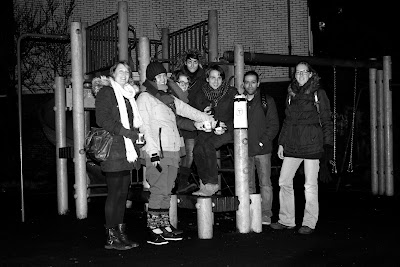 I stayed last night at the Auriollan apartment cause of the NIGHTWALKERS#7. 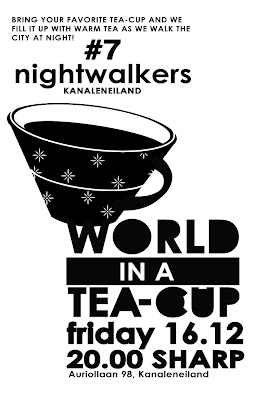 We envited people to bring their own tea-cup ad promised to fill it up with warm tea. Starting this time inside, we screen a series of youtube videos related to tea drinking, we shared stories about how we got each tea-cup and walked in the park for an outdoors cup of tea.


Eight people attended including me. Again not much but we are not quitting! It makes total sense to go on and Norna, Mai Lihnh, Calrijn and Koen are as persistent as I am.
We scheduled  Night Walks all the way till February and we announced them as a WINTER EDITIONS.
We additionally created a survey for all of the attendants of NIGHTWALKERS sessions.  You can find it and fill it in here: http://www.surveymonkey.com/s/L6VRMLZ

THIS MORNING
I woke up to post the group photo on the NightWalkers facebook group and put on some music.
Strangely enough one of the neighbors is listening to same song as I!  I can hear it from the walls but cannot determine where exactly it comes from! Is it from upstairs?
I posted an update on the Weiland 8 group on facebook asking to reveal him/herself if he/she sees this.
I connected my laptop to the speakers and played the song again. I bet he/she can hear it from the walls.
I could of course go out and knock the door of my neighbors. Could I? I guess I could. I am not doing it.

I guess it's not one of my male neighbors. The song is too 'soft' to like if you are a macho guy.
Stereotype after stereotype I exclude the next door neighbor, the girl on the apartment on the left with her boyfriend and so on....
Pretty lame way of going around it, I know! I bet a couple of years ago listening to that type of music coming from next door would have been quite a surprise. or wouldn't it? just thinking out loud.
Is that the face of gentrification? Is that breaking stereotypes or building new ones?
I get worried about it.
Birdy music started again coming from the walls.

Posted by LOCATIE:KANALENEILAND at 4:33 AM