But before I start, I feel an eminent necessity to question where I stand. Questioning the act and its content, in order to define clearly the grounds for a solid position.


What it means to translate? 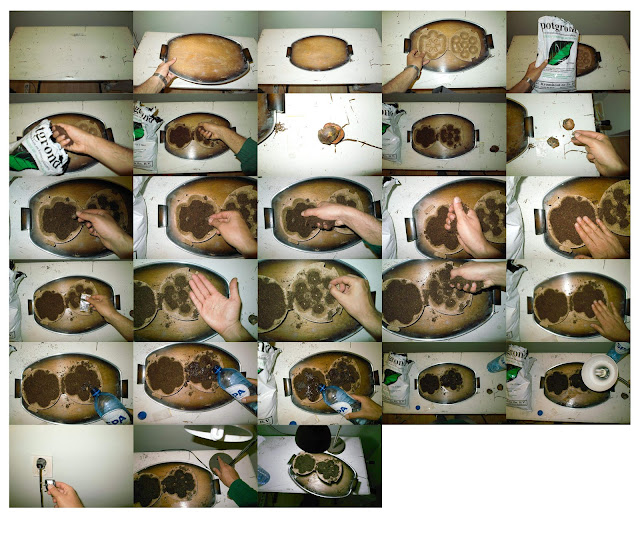 The first image that occurs, commonly, is the translation between languages (written or spoken), that a text is capable of being expressed in one other language.

A second case, would be the translation of this text into an image, for example, the conversion from one medium into another.

In a last case, more technical, and even archaic, refers to the ancient removal of a saint's relics to one other place, the process of moving an item from one place to another, involving a re-territorialization of that item and its aeffects.

(i cant avoid thinking about the newspaper article released today on the coming open auction of Hitler's personal items, ranging from his reading glasses to a unique copy of his Mein Kampf, signed to his cell mate, Rudolf Hess after their failed coup in Munich, in 1923 - who let them out?! – though jokes on Hitler in a raising nationalistic Europe are not taken lightly and got the film maker Lars von Triers interrogated by the police.)

The origin of the word 'translation' can be traced from late middle english, from french 'tranférer', and initially from latin 'transferre'. This last construction is the juxtaposition of trans- 'across' with ferre - 'to bear'.

So I wonder what I am (capable of) carrying across these two territories, Detroit and Kanaleneiland, what is the baggage that comes along with me, as an artist and as a person.


One of the so-called risks of translation is the 'inappropriate spill-over of source-language idiom and usage into the target-language translation'. Spill-overs import unique source-language loanwords that enrich the target languages, creating hybrids named as 'multi-languages'.

(i cant avoid thinking of Monte's Span'english, the playful shift between english and spanish, spoken by many Mexicans living in the United States, or Portuñol which I speak fluently every time I encounter my neighbor Spaniards, kicking portuguese words out of my mouth with a spanish accent - its physical phonetics, which is the most affective part of the bodily knowledge of a language, and easily emphasized with)

Next to these excesses, another usual mishap happens within the gaps between languages and their localized meanings, between territories and their boundaries. Some years ago I stumbled upon the following text on ‘Mistranslations and 'failed advertising campaigns' which reveals this gap in a ingenious manner:

1. Translations.
Aware of context I do an internet search on the phrase “failed advertising campaigns”. There, amongst the frantic exhortations ‘your company can’t afford a failed advertising campaign’, the adds for subscription copywriting courses and the lengthy theoretical agonising about corporations who have lost their market share, the sites I’m most struck by are those which feature a jocular catalogue of advertising blunders in which product names and advertising slogans are ‘humorously’ mistranslated.
Scattered on the web – in the humour pages of lads magazines (last updated 1998), in the ‘miscellaneous’ and ‘funny stuff’ pages of so many computer programmers, chemists, students, bankers, teenagers and in sites hosted everywhere from Rochdale to Perth – these assembled one liners have little status as truth, floating free and far from whatever articles, news items or gossip that may have borne them long long ago.
**In Chinese, the Kentucky Fried Chicken slogan "finger-lickin' good" was translated and used on billboards reading ‘Kentucky Fried Chicken "eat your fingers off."’
The car whose name turned out to mean “tiny male genitals” in Mexican street-slang, and its rival which was accidentally named in translation the “Won’t Go”, the billboard slogan that became "bite the wax tadpole" in Taiwan or "female horse stuffed with wax" depending on the dialect, the magazine food ads that declared in bold erroneous Spanish translation “it takes a hard man to sexually arouse a chicken”.
These are puerile whispers. Insignificant texts. They are scattered stories. But if their assertions have no more than the status of a rumour, we should\ also know that all rumours have, if not a truth, then at least a shadow of reason, a frank if distorted heart, a core, a purpose, a problem to work on. These stories (like all stories of mistranslation) mark the power of language to cause confusion instead of the transparency it promises. These stories (none longer than 35 words) celebrate that confusion as again and again the best laid plans of powerful corporations are setback, wrecked or ridiculed by a mistranslated word or a misplaced emphasis, transformed by a shift in cultural or linguistic context. From the mistranslations (as from all failures) seep other truths, other realities. The gap between aspiration and the world’s true condition is made visible in accident.
In fact I don’t really like the stories so much as I like the fact that they exist. That against the branded tide this more or less insignificant sub-genre of viral narrative spreads its inexorable message - that the rich and well resourced are also foolish, that the same language with which they enthral a globe is also slippery, unpredictable, that words themselves can double back and bite the hand that bred them. That the mighty can fall.
In Taiwan, the translation of the Pepsi slogan "Come alive with the Pepsi Generation" came out as "Pepsi will bring your ancestors back from the dead."
Here the mistranslation makes a promise of preposterous and frightening magnitude. But it only serves to point us back with fresh clarity to the original which, though lacking occult tendencies, is easily as preposterous and offensive an assertion. Pepsi will not, we can assume, bring our ancestors back from the dead yet nor will it, bar the effects of caffeine and glucose, make us come alive.
The toothpaste inadvertently given the same name as a local porn magazine, the hotdog brand translated as Big Cocks, the new car model translated as “the masturbator”, the slogan for a fountain pen which when mistranslated boasted how it couldn’t leak in your pocket and would never make you pregnant.
The content of these micro narratives is relentlessly twisted, scatological, sexual, perverse, destructive, morbid, bizarre. It is the chatter of advertising’s unconscious, made visible in the slips of its in any case slippery tongue. To some extent these mistranslated slogans posit the reverse of advertising – the reverse of publicly acceptable language – in which, from beneath the promises of health, wealth, coolness and sexual pleasure seep slogans of death, impotence, failure, impropriety, decay .
Amen to that. 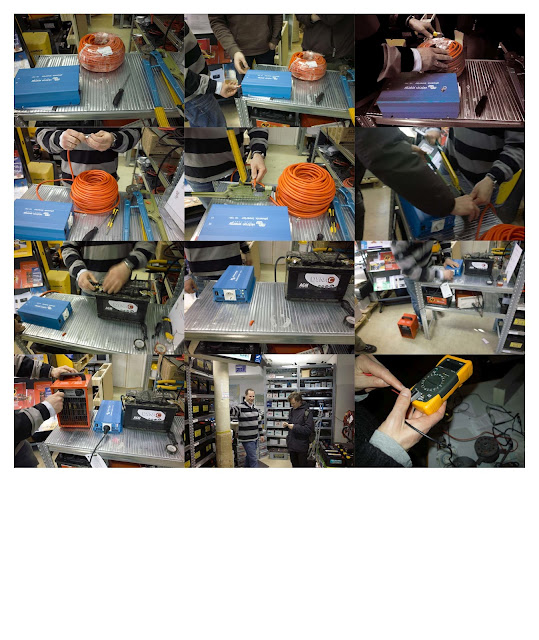 'off the grid' architecture studies
knowledge transfer on creating a power system 'off the grid' for own work at Festival a/d Werf, Utrecht 2011

The second part of this text, I keep for wondering what is it the content of these translation series.
Beyond any mystified and cryptic word, such as new strategies, urban translations, creative responses and the like, what was really out there, back in Detroit?
What was it, that those 2 months and a bit more, gave me?
The definition of common, separates into two domains, which are related, but completely distinct.
One is the representation of the earth and its ecosystems. The other, is the results of human creativity (ideas, knowledges, codes, aeffects, languages, and the like, which are potentially open and shared).
It is this other representation of the common that those two months in Detroit gave me access to, the re-presentation of the common within a territory that has been completely exhausted, and abandoned by Capitalism under the organization of life according the principles of Fordism. A 67 days joyride on what is there to do, after life has been devoured and drained, like in a B-movie vampire orgy. A system that is now at work and full speed on this side of the Atlantic, and rapidly devouring any kind of social structures as 'we' got to know then for the last decades.
old men & old women remember 'what things used to be like' , young people better try their best to forget and move on…
Still this other idea of common drives me through a complex situation, a sorts of a double edged knife I’m trying to grasp without getting cut. The 21st century reveals the tendency in the capitalistic economy to center even more economic production on common goods - which, in effect, poses a dilemma if not a contradiction for capitalistic accumulation because common goods are only productive when they are openly accessible and freely shared. This goes against their privatization as property.
They don’t operate a logic of scarcity, they are unlimited and become more productive if 'both you and I use it'. A second industrial revolution is taking place, based on the shared knowledge from the DIY (‘do-it-yourself’), transferred to a communal territory, a ‘do-it-ourselves’.
This 'common' knowledge can be the common that already exists - an affective resource (though the already existing common is usually very localized – like the knowledge gathered in Detroit, functions within that specific context, and does not necessarily functions in any other part of the world), and the new common yet to be produced (a shared dimension of immaterial production that 'we' can generate).
They are two disparate forms of knowledge, bound to very different conditions, which raise various questions.
How are these two different commons sharable across such different contexts?


How these local knowledges can be scalable? How access to them can be open beyond locality?


How to deal with the fundamentally local, or rather territorial, about the production of the common? 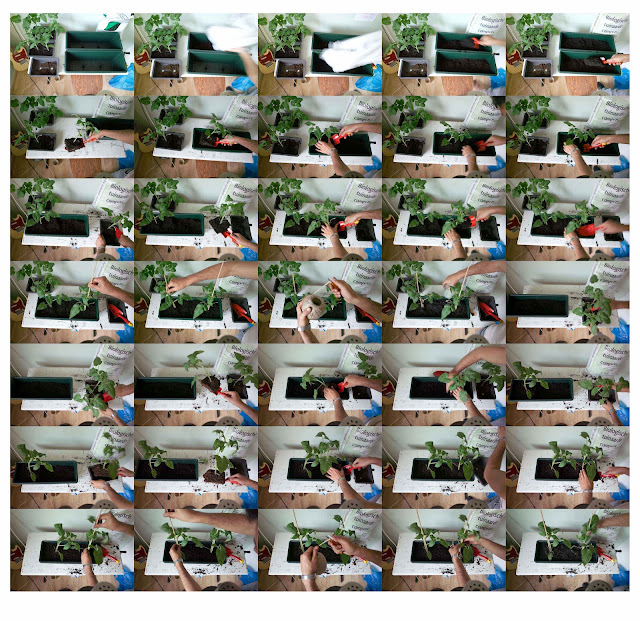 The city itself, not just the built environment, but the fabric of the place - is a crystallization of past productions of the common. From this main point, what are the instances when the common does have the potential for transfer, for extension beyond the local?

These forms of the common, social and cultural vocabularies, would undoubtedly undergo a transformation in the transfer process. These 'imported' patterns of behavior have to negotiate with the established habits and value system of the local populace. Through this negotiation, something new emerges, local to the city, the new locality.

Considering the common in relation to transfer and extension, it becomes a field of translations more than a growing global bank of shared or shareable knowledge.

As a field of translations, the common is produced by both the addition of new blocks of knowledge and aeffects and by constant and small adjustments and alterations. It can be seen as a dynamic process of minor tweakings and reformattings.

Such translations or transfers of the common are not - and perhaps cannot be - planned or determined in advance. They proceed through a kind of experimentation, in a way of cycles of struggles follow a zigzag movement as every repetition is subject to experimentation and innovation.

Previous translations of the common become part of a bank of experience. They are tools that can be reused.

Usable models to expedite future transfers of the common from one location to the other in the ways that the common is generated in "unexceptional" everyday practices - in a minor change in clothing style or language that codes a difference, in coming up with ways to deal with power or food shortages, in shared adjustments to moral criteria.


Sources:
Tim Etchells ‘On Mistranslations’ for The Institute of Failure
The Locations of the Common: a conversation with Michael Hardt
Posted by LOCATIE:KANALENEILAND at 6:09 PM