Part 2, to what and how to respond, departures and arrivals or/and even a pen has a stand. 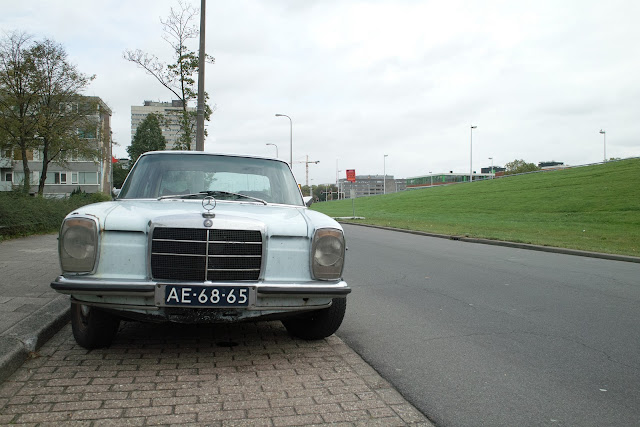 the oldest of the many Mercedes-Benz diesel cars found in location, Kanaleneiland 2011

to what and how to respond, or broken events on nostalgia and migration
This piece of writing sets itself to be a rhizomatic sketch book through the notes taken through out the period of September, October and November 2011, spent on various visits, stays and post-reflections on the location of Kanalenejland, through a residency at the art space of Expodium, Utrecht, NL. As a journal is meant to be read as a travel log, from day one to day... from part to part.


Departures and arrivals or/and even a pen has a stand.
As most art projects being run in this location, when a person starts a project here, has a set of rulebook to abide by. One of them, is the rule/obstruction, found within a written contract, of giving an answer, a response, whatever creative form that might take, the question 'what you give back to the local communities'.
This, added to the idea of translating knowledge from the residency in Detroit (follow link for reference), and (the most delicate one) the fact I'm only here for a period of 30 days, makes it a complex (unfortunately usual) situation.
To give something to someone, that someone must accept it.
To accept it, 'someone' must want it.
How can I make someone want something from me?
I need to get to know this person.
Within 30 days, how can I not feel the clock ticking.
Every time i meet this 'someone'
, how do I get to know who and what this 'someone' wants or needs?

For one, I don't wish to make the situation more volatile than it already is. My presence here is seen as an invader, from the original inhabitants. I 'represent' the state creative agent, part of a gentrification gamble of the city hall. They have to move out, so I and other artists, move in. It is a territorial takeover.

For two, I don't wish to target the easy, most accessible 'communities', nor the young kids that hang out in the streets, because I'm not a social worker, nor the artist's communities, because I don't want to 'add on' to this 'invasion' more than my presence already does. Feels like walking on sticky ground.

In my usual ethos, for this 'encounter' to take place, I try to, instead of coming up with a new concept (to colonize a territory with my presence), I rather respond to some phenomena existing in the location prior to my temporary stay, and attempt to support what already exists, and will keep existing after I leave, beyond my presence. I want to give one step back in order to give two front, at some point, who knows when.

Giving one step back, letting the location come to me, so i can give two steps forward...


I decide to google 'Mercedes Benz' and 'north africa', I come to this succession of images: 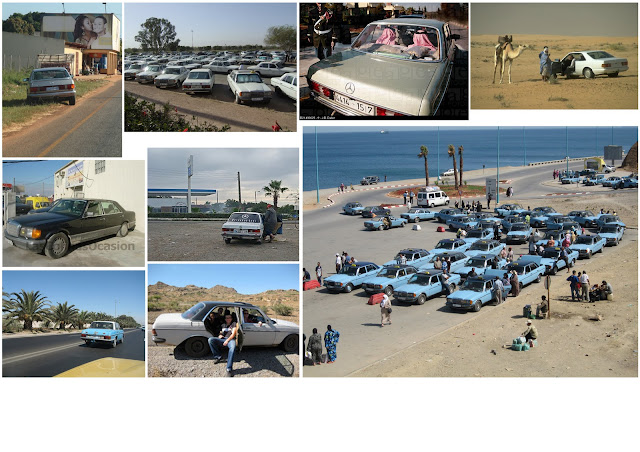 From taxis in Morrocos, to one of the most resilient car to endure the hardness of the desert, Mercedes-Benz is one of the most used cars through out the countries in North Africa.


The presence of this car in the location of Kanaleneiland, is a gateway to a past that a first and second generation still carries, an exotic and out of place item to the third generations, and those that know little from the origins of the local emigrants. A monument to the past, anachronistic at its best.

anachronism |əˈnakrəˌnizəm|
noun
a thing belonging or appropriate to a period other than that in which it exists, esp. a thing that is conspicuously old-fashioned : everything was as it would have appeared in centuries past apart from one anachronism, a bright yellow construction crane.
• an act of attributing a custom, event, or object to a period to which it does not belong.
DERIVATIVES
anachronistic |əˌnakrəˈnistik| |əˈˈnøkrəˈnɪstɪk| |-ˈnɪstɪk| adjective
anachronistically |-ˈnistik(ə)lē| |əˈˈnøkrəˈnɪstək(ə)li| |-ˈnɪstɪk(ə)li| adverb
ORIGIN mid 17th cent.: from Greek anakhronismos, from ana- ‘backward’ + khronos ‘time.’ 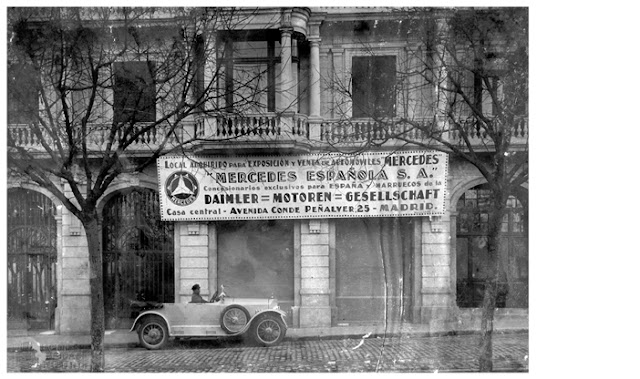 mercedes-benz shop in madrid, responsible for imports to marrocos, madrid circa. 1913

What is the dream of the emigrant?

photo collage of portuguese emigrants traveling from Portugal and settling in the Champigny, a surburb from Paris, 1960's

→ check youtube versions of 'should i stay, should i go' from 'The Clash'

an european pan-american dream of migration, or just an extract from the Clash song 'should i stay or should i go now'

(but hey, the magic happens always somewhere out of one's comfort zone, right?)

Back in the 50's my grandfather migrated to Paris, as many other portuguese folks. The fascist regime back then didn't allow legally portuguese inhabitants to leave the country, unless they would have a legal confirmation of a contract or business plan.
So most would run away through the country borders by bribing the border police patrols (these bribes ended being one of their main incomes).

For 20 years, grandad worked in construction sites in the suburbs of Paris, sending back home money, so my gramma would take care of the farm, of her two sons (one of the my dad, actually they were 3 but one died in labour), and would purchase more land. Over the years, gramma managed to deal well with the job, and grandad kept working from construction site, to construction site.

The moment that grandad saved enough money, and gramma purchased enough land, they became autonomous. They could live from the land, and grandad came back. The job was done. France didnt need more portuguese, actually algerians and morrocans were taking most of the jobs now. Grandad came back home when my dad was 24. He had already been through 2 military services in the colonial war in Guine, and was married by now. My sister was already born. I was on the way.

I doubt that these days oneself can actually do this... save enough money by being an emigrant, to come back 'home' and achieve her/his emigrant dream.

but these are similar stories this community share. Of leaving and living, of longing for a past and a future, without ever possessing either. Just a present filled of broken stories, like a wall covered with different broken tiles from different times. 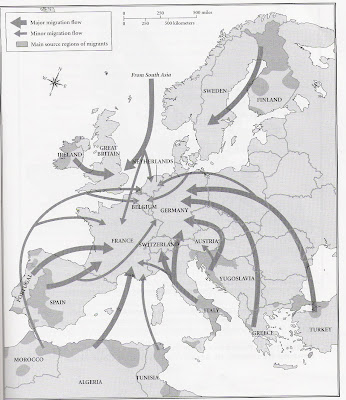 The turkish guy that has a bike shop somewhere downtown


At the beginning of the residency, we are short of one bike. After some chilled out tram rides (i enjoy being able to take time, walk, observe people, besides the nostalgia of using hard paper travel stamps, the old stripen cards, gone in A'dam, but still in use in Utrecht), the days I need to make some series of errands around Utrecht arrive, and I decide to buy a bike.

I notice a second hand shop, with some good 2nd hand bikes outside. I pick an 90's gazelle, with a solid steel body,  and a high gentleman frame. After all these years in NL, I had all kinds of bike styles, but never this model.
For 75 euros, and after a test drive, it seems a quite solid bike, and rides smoothly.

As I pay with my ING bank card (the old Postbank that went private - I haven't still changed my bank account to Triodos or one other 'ethical' bank),  I indulge in some small talk with the owner of the shop. His name is Rachid, and came to The Netherlands to work, save money and return. We both agree the weather and the living up north isn't as smooth as down south, but if you want to save some money with a small job, it's here, not there. Upon return, he hopes to open a small caffe, or something of sorts.

Is this there is about life? Spend the best years saving for a golden dream at the departing years? Is it still possible now, like in 'the good old days'?

I get more and more surprised how similar this europaeuropa dream is to the american dream (surely imported due to the Marshal Plan), with the extra layered flavor of a post-colonial emigrant cheap labour. But how is it all changing with the current political and economical turn of the EU? 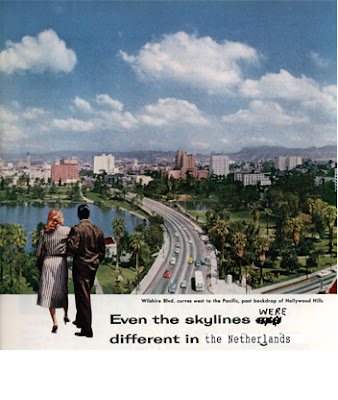 As i spend more time here, it all feels so familiar yet, very alienating to me.

I say 'hoi' on the streets but very quickly I start to say 'shalam' because the only ones that respond back are the morrocan and the turkish... the ones with predominant dutch features tend to look sideways, with some sense of aversion or guilty, or a mix of both.

I realize my portuguese ethnic physical features resemble more to a southerner, and in this location, I'm boxed as an north african emigrant by the original netherlanders. But for the dutch-morocan or dutch-turkish, I'm still 'one of the other artists that come here and do some projects and then leave'. So... uh...where do I really belong to?

Over night I youtube 'taxis lisbon' as I indulge in the nostalgia of 'home', Lisbon, reminding myself that most taxis back home are mercedes, and end up making this compilation of the youtube footage.


Our neighbor from upstairs
by the way,

Later in the evening, i arrive back to the k-home. As i lock my bike, a small and old man, white hair, moroccan, holds the flat block door open. We exchange a 'thank you, good evening, where you come from, whats your name' with a very paced timing. He asks me if I speak dutch, and I reply that I started my assimilation course, but I skip it because of work. He replies a short and comprehensive 'haaa'.
He points to his mail box, asking me if I want something. I get a bit confused. He takes out one dutch unox packaged sausage, lying among his correspondence, mainly publicity and city hall letters. I ask if he doesnt truly wants it, and he says, with lowering his hands around his stomach, 'I cant take it at my age'.
The conversation meeting encounter ends with a 'thank you so much and the wishes of a good night'.
I come in the x flat and Nikos is at the living room, chain smoking and working on his laptop. I join him and we talk about art.
I regret I never visited Achmed our upstairs neighbor. 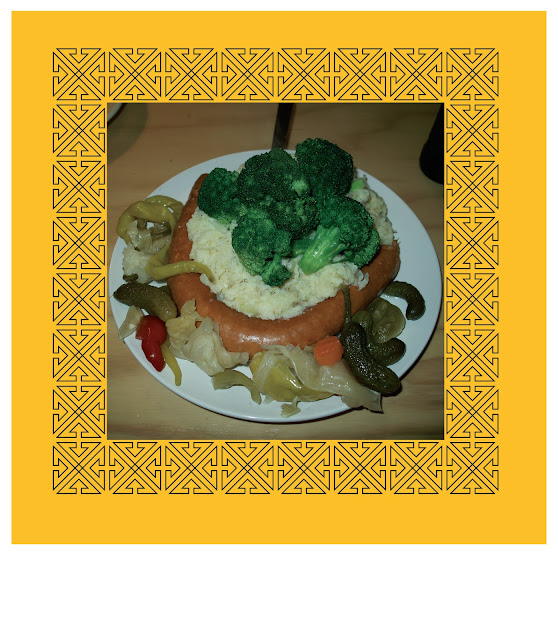 meal made with Achmed's Unox give away dutch sausage, framed in Egyptian patterns


Arab Europa, patterns and maps, the past and the future 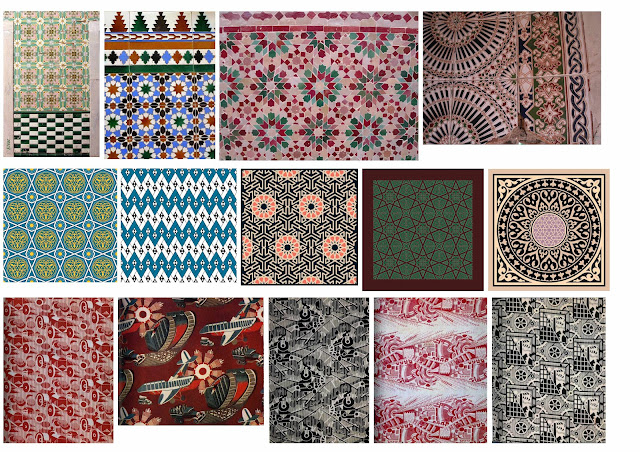 i decide to go back focusing on the mechanics and chemics, to the concrete. getting off the ground is a wrong way to get at it, all because we the poor dont have metaphysics.

Posted by LOCATIE:KANALENEILAND at 9:29 PM