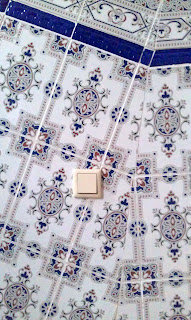 This week we landed in Kanaleneiland to take in its social and built landscape for Expodium’s Sneak Week in preparation for a project to be realized in June. It is indeed expansive.

Jasper and I set out to find a way to mediate between the 1:1 scale of the street level experience and the scale of the master-plan of this massive housing project. Built in the 1960’s this neighborhood was already condemned as a failure however, morning till night what struck us was how quiet it actually was and the ways that the plan still provides basic functionality for its residents. This was one perennial antinomy of many.


We decided our work must find a way of binding up the scales and registers at play in this area. We found ourselves on the IRC chat of the UAPV project, an open-source unmanned aerial vehicle ( http://www.youtube.com/watch?v=3CR5y8qZf0Y ). Visiting three mosques in the area brought to bear the way that the latent Islamic aesthetics play out in the communal and national pressure to clarify identity.  Visiting libraries we photographed books on desert expanses to concrete cosmic Soviet architecture and from modernist sculpture to traditional geometric ornament. These images were duly recorded for reference but the process of making them meant they would become ingredients in our concoction.

It occurred to us today how much our role resembles the feature of  the Calcutec, from Murakami’s novel (Hard boiled wonderland - the book I have under my pillow at the moment). The Calcutec has been trained to use his subconscious as an encryption key. The Calcutecs work for the quasi-governmental System, as opposed to the criminal "Semiotecs" who work for the Factory and who are generally fallen Calcutecs. The relationship between the two groups is simple: the System protects data while the Semiotecs steal it, although it is suggested that one man might be behind both. Converting the world into codes, corrupting the production of meaning. We eventually delve forever into the world that has been created in our subconscious mind.
One could say that the Calcutec is similarly detached from society. He prefers being alone, drinking whiskey, listening to music, and reading old novels by dead authors.

We did often go outside though, as the public area’s between the high-rise housing blocks at Kanaleneiland were the domain from which we were supposed to extract information. Information like the status of the weather, the amount of people on the streets, the cat meowing at night, the arrangement of receivers mounted on balconies, the various languages in which the word w e l c o m e is spelled out above the main entrance throughout the street, the peculiar design and cryptical functionality of the devices set up at playgrounds… the age-level of kids making obscure deals when leaning against these structures... etc. etc.

Digestion meant that the key points of interconnection did indeed arise. We found that the term ‘Horror Vacui’  was used for both open-space between the housing blocks and the last Orientalist reading of Islamic geometrical ornamentation. This translates to the fear of empty-space. Caravan’s crossing the endless sands finally arrived at city centers or sarais to feel the presence of being- social or divine. The space between the stacked dwellings became a place of dark possibility. We chose not to treat this concurrence as mere coincidence.

Our brains filtered though photo-archives of the city, picking up on a vision of an architectural future that now lays far behind us. Floating through computer renderings of a reality yet unknown, but ideal. We flipped through books on monuments in Timboektoe and Teheran, untitled modernist public sculptures and geometric patterns in the undulating fields of Morroco and those with which we imprint the land under our shoes.

This week of encounter and inquiry brought Jasper and I into agreement that the contradictions of this place should not be smoothed over by ‘picking sides’ or by making ourselves useful in ways that seemed hardly appropriate. Instead we decided that we would bind up these contradictions in a work that incorporates a variety of perspectives at once. A work that absorbs all the narratives constructed to explain and explain-away the monumental construction that is Kanaleneiland. 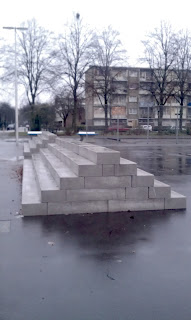 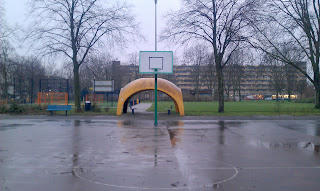 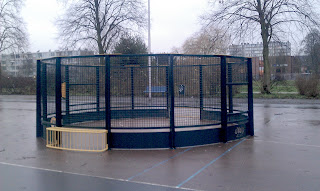 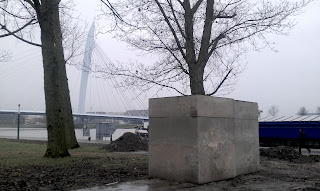 Posted by LOCATIE:KANALENEILAND at 12:28 PM