Beauty lies in the eye of the beholder

On Wednesday I decided to go out with my camera to produce a kind of database of things that caught my attention. I was a bit nervous about sneaking around and photographing whatever I thought was interesting, but no one seemed to take offense. I was very clearly taking the role of the outsider - to the extent it was not obvious already - and the children presupposed I was from the press. This made me cautious of contributing in some way to the image of Kanaleneiland that has been produced in the media as one of the worst big city neighborhoods in the Netherlands. Would the people who watch me like it more if they see me focusing on beautiful aspects of the neighborhood? What would they consider beautiful? 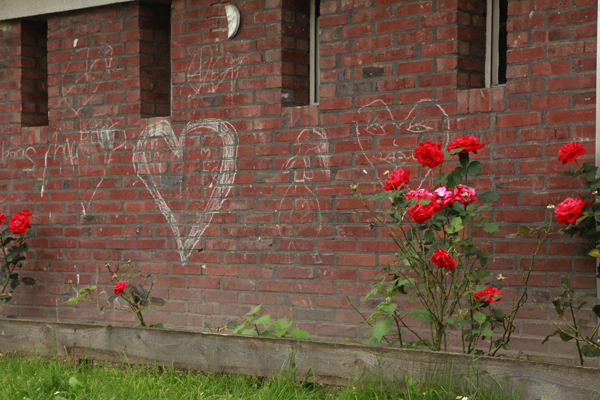 Kanaleneiland was build in the beginning of the sixties as one of the new expansion neighborhoods of Utrecht. It was designed by C.M van der Stad following the ideals of 'het nieuwe bouwen' (the new building). The neighborhood is characterized by uniform apartment blocks build in a repeating pattern. Around these buildings there are big roads - Kanaleneiland is designed for cars, because this was the upcoming transport in the sixties - and a lot of green gardens and courts. There where many rose beds which gave the neighborhood the nickname Rose Isle.

A lot of information about the history of the neighborhood and urban planning throughout the years can be found on the website of KEI (unfortunately only in Dutch).
Posted by LOCATIE:KANALENEILAND at 3:08 AM