My plan to keep a kind of diary on the blog didn't succeed because of some internet trouble.. I will try now to reconstruct my week to start a kind of archive.

On my second day I met Kyohei Sakaguchi, a Japanese artist who came for a residency in Casco. He is doing research on homeless people and their shelters. First we discovered hidden histories of the Utrecht underground; we where guided by an ex-drug addict who showed us where the junkies in Utrecht used to hang out. In the beginning of the nineties the shopping mall next to the station was a Valhalla for dealers and users. It was open 24/7, dry, warm and you could buy dope, sell stolen goods, get stoned and sleep there. These days you see hardly junkies in the inner city of Utrecht - they stay in the sleep-inn or the users spaces. When they do stay in the city, they get fined.

I find it interesting how the municipality uses and designs specific street furniture to keep junkies and homeless people away - they put for example bicycle racks in front of the warm air-conditioning system of the post office. This in order to prevent the homeless people to sit in the warm air. Also the benches in the bus stands have a convex surface, which makes it very uncomfortable to lie down on them.

In the afternoon we visited the squad of Kanaleneiland - next to the Ikea. Kyohei was very charmed by their home-made garage. 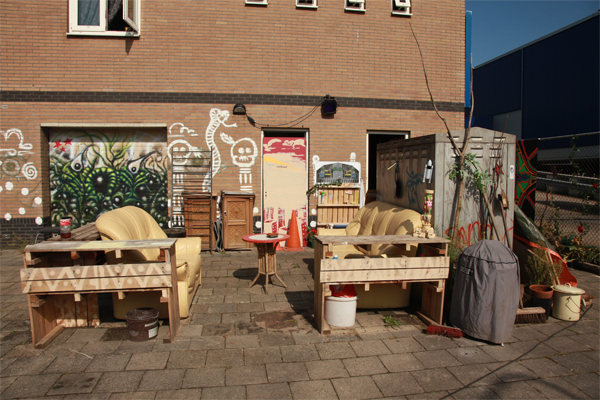 In the evening I went to Resto van Harte, a neighborhood cafe which serves food for little in the community center. I discovered that most of the guests are frequent visitors from all over Utrecht who go on several days of the week to different social cafes. Also the breakfast in the Ikea - for one euro - is popular.
The food was delicious, I was especially impressed by the garden salad which formed the starter. This was a beautiful salad composed of veggies and flowers from their own garden. 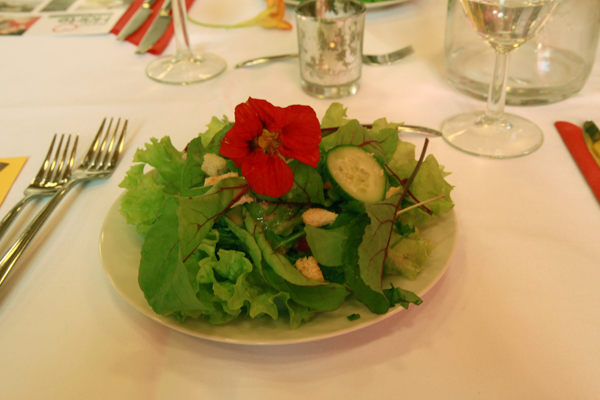 Posted by LOCATIE:KANALENEILAND at 2:44 PM